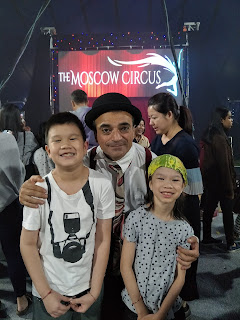 We had a great time witnessing jaw-dropping performance of dangerous and thrilling acts by aerialists, high wire walkers, trapeze artists, acrobats, a juggler, roller-skaters, diabolo spinners and illusionists, all held together by one of Russia’s most well-known circus clowns, Armen Asiryants. Kids had so much fun watching the act of the circus clown and I like the jugglers most.

Over 100 years, Russian circus acts have been universally acknowledged to be the world’s pinnacle of circus arts, thrilling audiences around the world with dazzling performances that amaze, amuse and inspire.

Proudly animal-free, each performance will take place under a 2,700-seater fully air-conditioned circus Big Top, the largest circus tent in Malaysia. It's a 2 hour show with 20 min rest time in between. 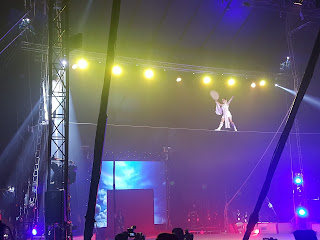 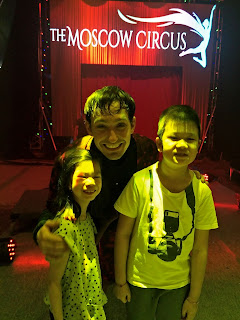 FEATURED ACTS
Master Juggler - The Incredible Semion KrachinovOne of the most sought-after jugglers in Russia, Semion Krachinov's skills are truly second to none. You'll be caught between trying to keep up with his act and admiring his dashing good looks!
The Moscow Circus Clown - Armen AsiryantsThis clowning superstar, one of the best in Europe today, is the constant feature throughout the entire program. Kids will love his hilarious act!
Flying Trapeze - The Tokmachev TroupeNo circus is complete without the traditional flying trapeze, and the Tokmachev Troupe are one of the very best! You'll be left transfixed as they perform the triple somersault as well as some surprising (and heartstopping) specialty tricks!
High Wire - The Svezhov DuoIt's nail-biting time! With grace and artistry, the Svezhov Duo perform extremely difficult tricks as high as ten meters in the air, leaving absolutely no room for error.
The Air Trio - Olga, Svetlana & NadezhdaGraceful and glamorous, the beautiful Air Trio combine pinpoint ballet with breathtaking aerial gymnastics to create an enchanting experience.
Aerial Straps/Silk - Roman & NataliaRomance in the air is what you will feel as this beautiful couple perform the graceful but extremely dangerous aerial silk routine.
Roller Skaters - The Romanov DuoOne of the top roller skating acrobatic duos in Russia today, the Romanov Duo showcase their incomparable skills with breathtaking and head-spinning speed.
Illusionists - The Moskalov DuoMykhaylo and Lyana from Ukraine are master illusionists. You'll be scratching your head wondering just how they change between beautiful and complex costumes in a flash.
Diabolo Spinners - The Romanov DuoRarely performed nowadays, the Romanov Duo combine the traditional circus discipline of diabolo spinning with acrobatic skills in a refreshing and eye-catching style.
The Russian Swing - The Skokov TroupeOne of the best Russian Swing acts today, the Skokov Troupe have been featured in world-class circus festivals as well as the renowned Cirque du Soleil. Watch as they perform fantastic somersaults and twists while propelled high into the air, bringing the entire program to a incredible crescendo of excitement and thrills!
SEATING PLAN

And now, for the first time in Malaysia, these elite performers will captivate audiences on a never-before-seen 8 month nationwide tour!
The Moscow Circus Tour of Malaysia 2018/19 officially kicks with the first show happening on 10 August 2018 at Padang Timur, Petaling Jaya, where the circus will be stationed for three weeks before moving up north to Penang.
Here is the venue across Malaysia: https://www.themoscowcircus.com.my/tour-dates/
You can get your tickets from: https://www.ticketpro.com.my/family/circus/index.html
Just a kind reminder, you are not permitted to bring in food & drinks into the circus area. However, light snacks and drinks are for sale before you enter the ring. Mineral water are sold at RM5 per bottle and food ie. hotdogs are at RM10 each. 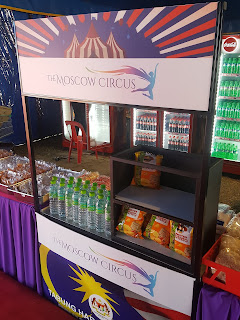 Do check out their souvenir stall upon exit too.
Have Fun! 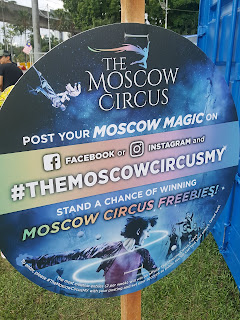